Imperva (IMPV) April’14 SA – Is Imperva the Worst Name In Cyber-Security Or Has It Fallen A Bit Too Much?

Is Imperva the Worst Name In Cyber-Security Or Has It Fallen A Bit Too Much?

Imperva (IMPV) shareholders had a “chicken little” moment, rushing out of the stock faster than a stampede through Wal-Mart on a Black Friday, after the company announced disappointing preliminary results for its just-completed Q1’14. Shares fell catastrophically, down 43% at the end-of-day yesterday, and off by over 60% from the highs just about a month ago (see Figure). 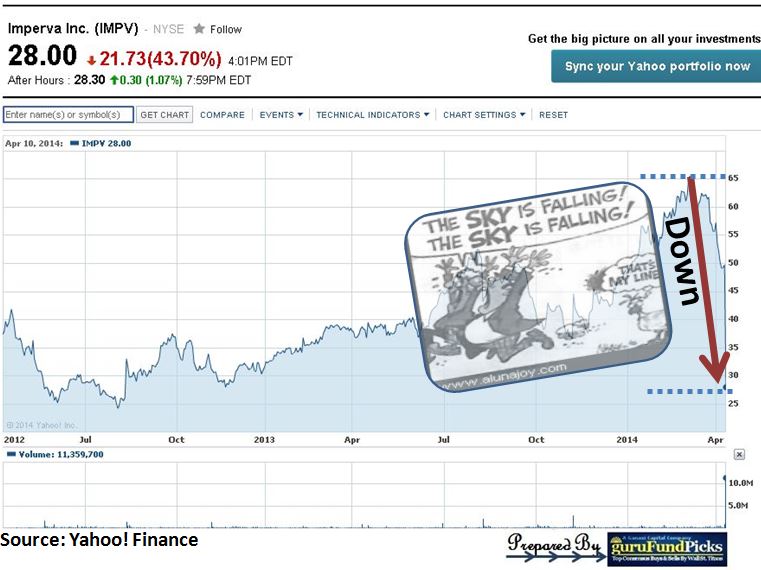 While such sharp moves are common in the manic world of biotech, where a single FDA decision or clinical trial result can make or break the fortunes of company, it is relatively rare among larger companies (market-cap over $1 bill.) in the rest of the investing universe, including in technology stocks. So, judging by how much shares have fallen in such a short period of time, one would presume that investors fear that the “sky is falling” on this one, that maybe growth is coming to an abrupt and unexpected end, or maybe there is a management or other scandal, or something else that perhaps poses a serious challenge to the outlook for the company.

In its announcement, Imperva warned that it expects to report revenues for Q1’14 in the $31 mill. to $35 mill. range, well below its prior guidance of $36 mill. to $37 mill., and it guided EPS down to a 40 cent to 44 cent loss vs. prior guidance of a 33 cent to 37 cent loss. In its commentary, CEO Shlomo Kramer indicated that intensifying competition for large orders and sales execution challenges in the U.S. led to an extended sales cycle and delays on orders over $100,000, particularly in the U.S. On a positive note, he also added that their overall win rates remained constant, and that performance was strong in the EMEA and in the sales of subscription products during 1Q’14.

In our view, this hardly classifies for a 43% hair-cut, much less a drop of 60% below recent highs.

Cyber-security leader Imperva is a pioneer in what it calls the third pillar in enterprise security, filling in the gaps in endpoint and network security by directly protecting high-value applications and data assets in physical and virtual data centers. As such, its integrated security platform complements those of many other cyber-security firms that block threats targeting devices (the first pillar) and those that block threats trying to access the network (the second pillar). This segment of the computer software industry has seen tremendous growth recently, with Imperva growing revenue at a 41% CAGR from just $17.7 mill. in 2007 to $137.8 mill. in 2013, as well as comparable growth at many of its peers.

As attractive as that growth rate is, firms in this space, including Imperva, are barely getting started, and the tail winds are firmly behind them that will potentially lead to long-term secular growth going forward. That is because while the nature of cyber-attack has rapidly morphed from an individual or criminal entity trying to steal your credit card info to nation states trying to steal corporate IP, organized crime stealing IP and data, and hacktivists exposing IP and data, and compromising the infrastructure. In contrast, most global corporations seem grossly under-prepared for this, and in fact, their IT spending on security has barely moved in the face of these threats. This creates a strong tail-wind for all companies operating in the cyber-security space as corporate spending will ultimately have to catch up to keep up with these threats.

In the table below, we compare Imperva with four of its closest peers in the cyber-security industry, based on the following three financial ratios that we consider to be among the most important in conducting a top-down broad industry analysis:

As you can see from the table, three of the five players, including Imperva, have negative EPS and EBITDA projections two years out, rendering the P/E and EV/EBITDA ratios not useful as a basis of comparison, which leaves us with only the Price-over-Sales Ratio (PSR). On that basis, Imperva is the cheapest at just 3.3x sales, and its projected five-year earnings growth is about in the middle of the pack. Even adjusting growth a bit downwards, based on the latest announcement, it is still the cheapest among the cyber-security plays mentioned above.

We discussed FireEye in detail and positioned it as an attractive buy in a prior article at the beginning of the year when it traded in the $50’s, before it went on to rise to almost $100 in the next two months. The fundamental thesis on FireEye has not changed that much since then, and the market may be gifting FireEye and Imperva, giving growth investors a chance to get in again at lower prices. Momentum players may be interested in both Imperva and FireEye based on a likely short-term technical rebound from these low levels, as FireEye is also down 48.9% below the highs just last month and it has formed a short-term double-bottom in the last week.

Besides a valuation and detailed fundamental analysis, we also consider an analysis of the moves of leading institutional money managers as imperative before pulling the trigger on a stock. On our site, GuruFundPicks.com, we track the collective or consensus buying and selling of over 330 of our hand-picked leading Wall Street fund managers, based on their latest 13-F and SC 13D/G 5% ownership filings. Their ownership change over multiple quarters, and net buying and selling, both in shares and in number of funds, and the percent outstanding shares held by these leading funds, especially when compared to similar sized peers in the same industry, is like reading tea leaves. It gives us the extra edge, increasing the probability of making the right decision, and in many cases saving us from making a wrong decision on a stock.

In our research, we have observed strong correlation between leading fund manager ownership, including their buying and selling activities every quarter, and the stock’s immediate and long-term performance. We have documented many such cases on our  website and in our archive of articles on Seeking Alpha, including five cases we discussed in just the last two weeks on Gilead, Facebook, BlackBerry, Mannkind and Micron.

The collective or consensus buying and selling activity of these leading fund managers in Imperva in the last seven quarters is shown in the Table below.

Our hand-picked 330+ leading fund managers collectively own 8.58 million or 32.9% of the outstanding shares, cutting 1.39 mill. shares in the last two quarters. If you were following these leading fund managers, you would definitely have exited, or at least lightened up on your position in Imperva in mid-to-late-February when the Consensus Picks’ reports from the latest 4Q’13 were available. In the latest quarter, the stock got a near-bottom 1.4 GuruRankTM, a proprietary 1-to-5 rating scale that measures the relative attractiveness of the stock to leading fund managers compared to all 5,300+ stocks held by them in the latest quarter. Also, while the number of leading funds holding Imperva stayed almost constant, we went from 23 funds buying and 10 selling in the prior 3Q’13 to 16 funds buying and 16 selling in the latest 4Q’13, a significant change in sentiment as Imperva shares rose towards the end of the 4Q’13.

The largest leading fund manager holders of Imperva shares at the end of 4Q’13 were:

You can view complete summarized 13-F’s of all of these funds, and over 330 more for free on our website, GuruFundPicks.com.

In summary, we believe that the cyber-security group has been beaten down enough, with many of these stocks trading at attractive levels. We particularly like Imperva and FireEye here, based on relative valuation and attractive growth characteristics, and also the potential for a quick technical rebound once it is clear that the selling has abated in the market. The cyber-security software industry is in a long-term secular growth trend that could pick-up as more corporations finally face up to the threat of protecting their intellectual property and data from foreign governments, criminals and hackers alike.

Keeping that long-term growth in mind, yesterday’s action in the group, particularly in the case of Imperva, looks more and more like a wash-out, and while we cannot rule out a re-test of the lows if the market plunges again on Friday or next week, the downside seems limited on this one while the long-term upside is significant. Indeed, most brokers too seem to believe that, as even after yesterday’s disastrous announcement, a slew of brokers came out, many in support, but with price targets well above current price levels. Deutsche Bank lowered their target to $40 from $60, Imperial Capital to $40 from $65, Pacific Crest to $48 from $62, RBC to $50 from $60, and BMO Capital to $43 from $57, all well above by about ~50% above current prices in the $28 range. It would seem that if prices were to fall further on Imperva or FireEye, they might even look as an attractive acquisition target to leading tech players like Cisco, HP, and IBM, that maybe looking to stay competitive in the marketplace, and boost up their growth.

Imperva is scheduled to report its 1Q/2014 results on May 1st, after the market-close.